I’ve spent much of the winter sick, and my riding has taken a bit of a back seat while I try to get back to health. But feeling strong again, the weather on the rise and a long weekend at my disposal I couldn’t resist the opportunity for a trip into the high country.

Day 1
A plan was hatched, a route was drawn and on Saturday morning I boarded the first train of the morning out to Traralgon with Mike, Chris and Gareth. The day started off with the wind at our back and we zipped along making good time along the Gippsland Plains Rail Trail. After reaching Heyfield and the end of the 30km rail trail we turned onto Licola Rd which climbed up and over into the valley that homes the Macalister River. 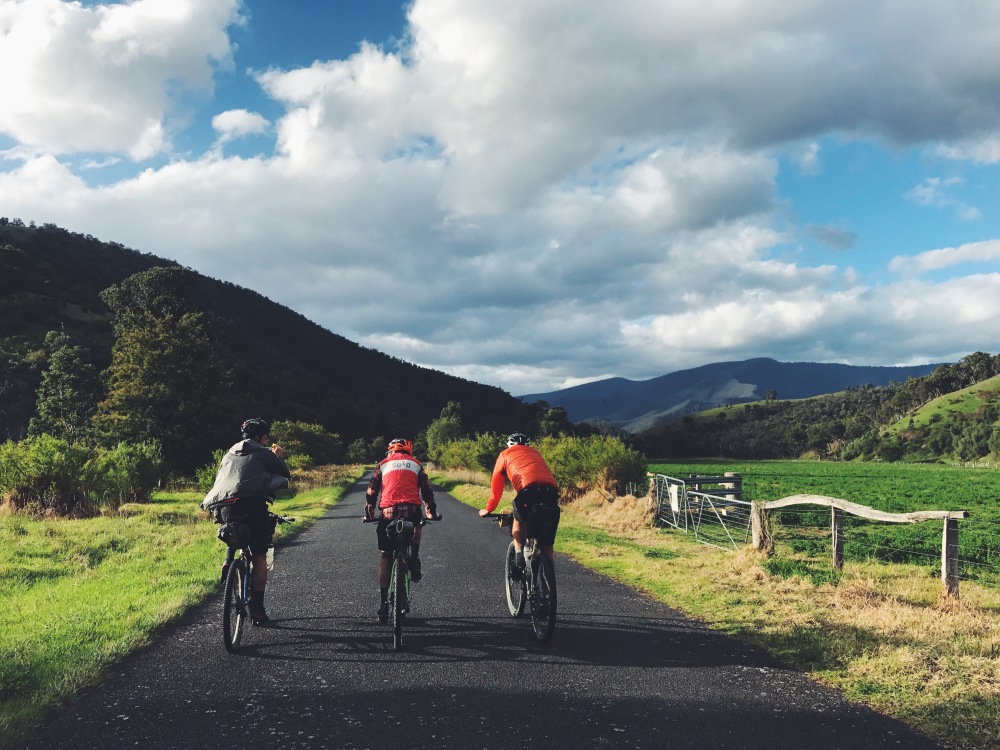 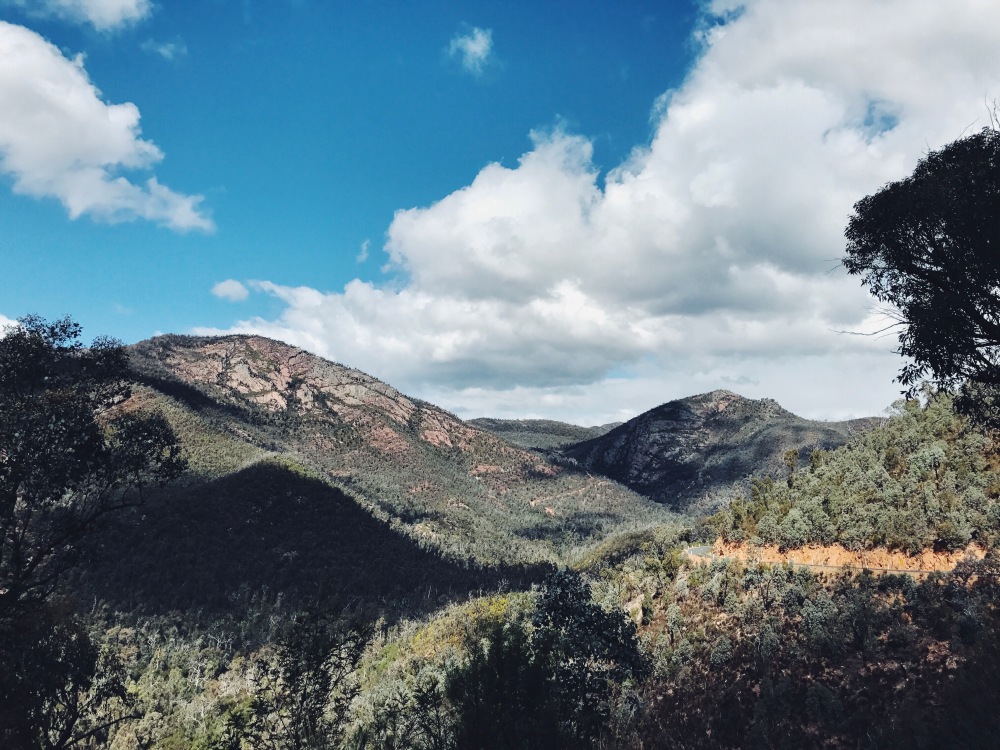 Once in the valley we were assaulted now with a stiff wind blowing from the north, bringing with it some light rain. Despite the weather we followed the valley further north and the mountains grew steadily around us until we reached Licola in the mid afternoon. The quiet town is little more than a general store and a caravan park but serves as a gateway to the high country. To the north-west, South Road climbs to Mt Skene and Mt Selma, however after a short break and refuel down by the river we departed due north along Tamboritha Rd. We shortly passed the confluence of the Wellington and Macalister Rivers and here began to follow the Wellington upstream. The river here is dotted with campsites and we found a quiet spot just before sunset where we could set up camp and light a fire to spend the night. 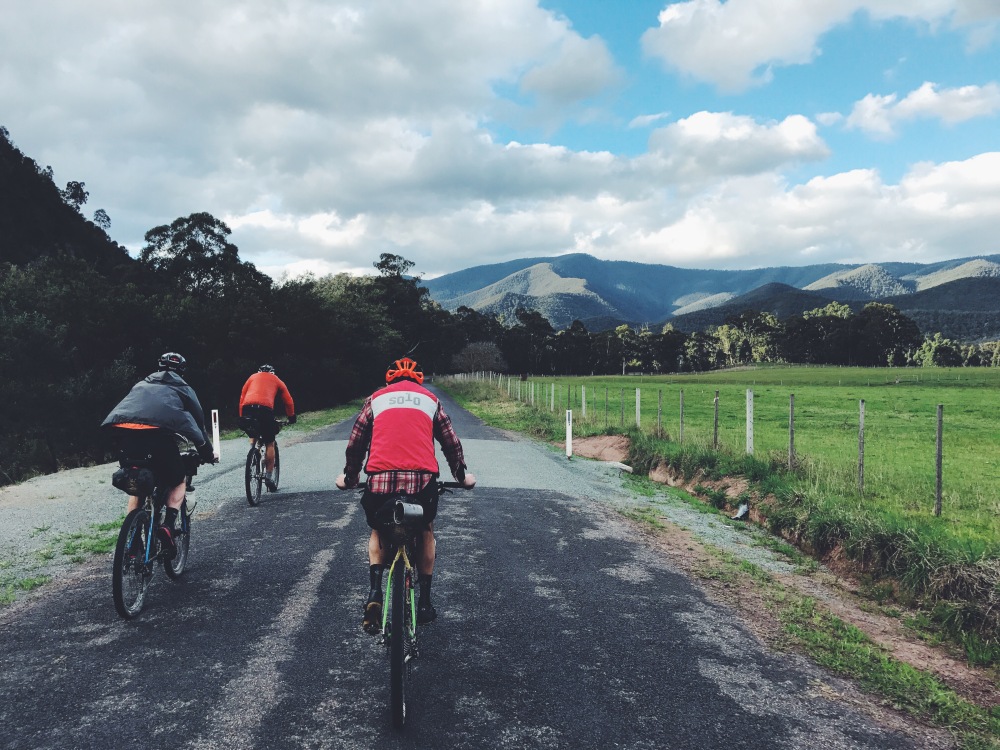 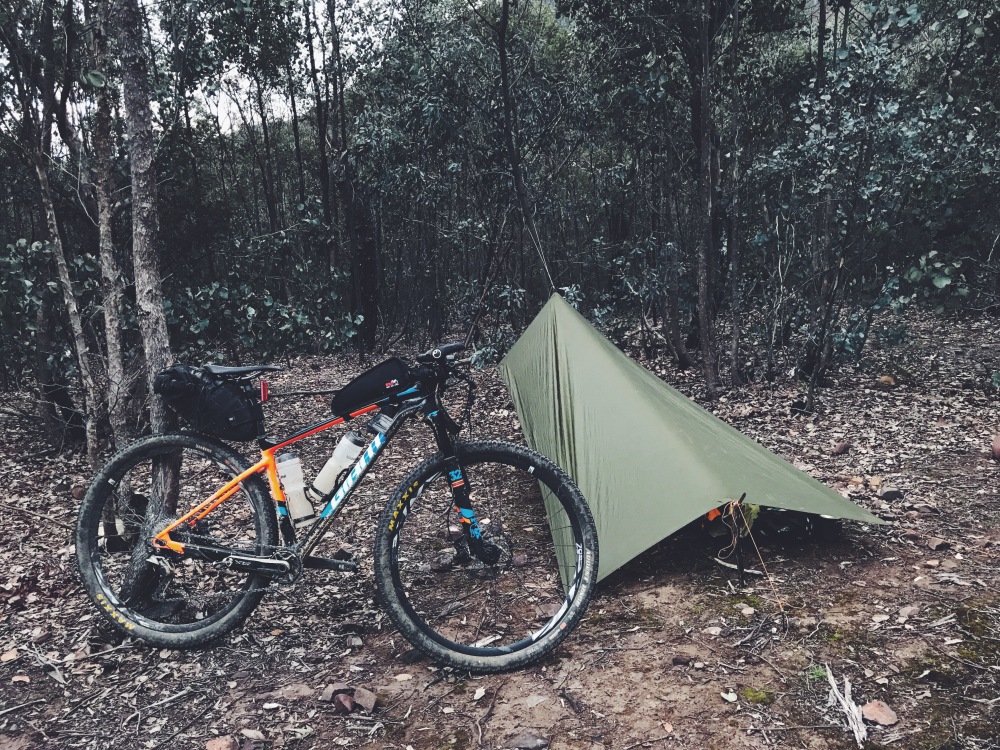 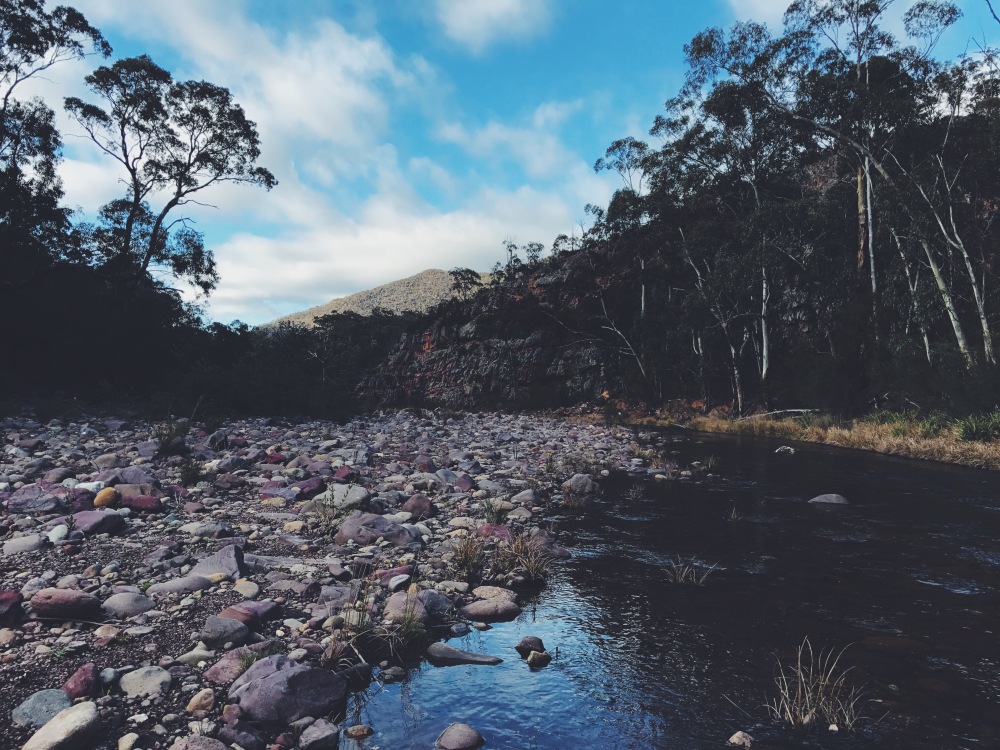 Day 2
Our second morning started with the long climb up Tamboritha Rd to Maroka Tops. The hard work of the ascent is rewarded with spectacular view back into the valley and across to the sprawling maze of ridgelines that welcomed us into the mountains. The top of the climb to Tamboritha Saddle is marked by an old, decrepit cattle yard; a relic of older times of drovers and high country cattlemen. 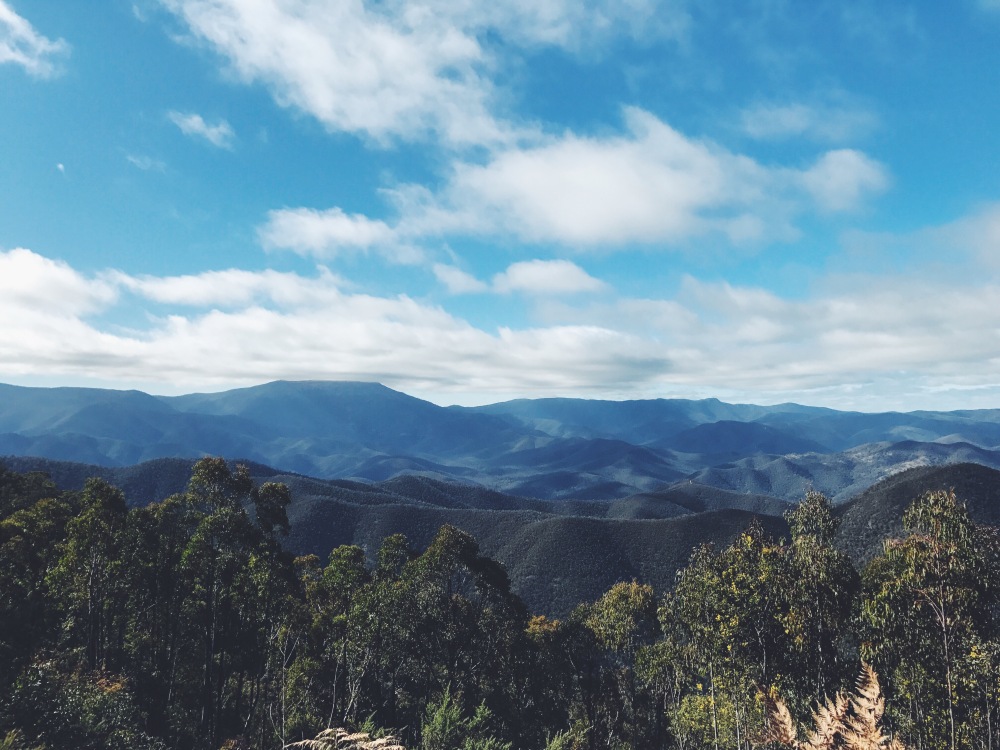 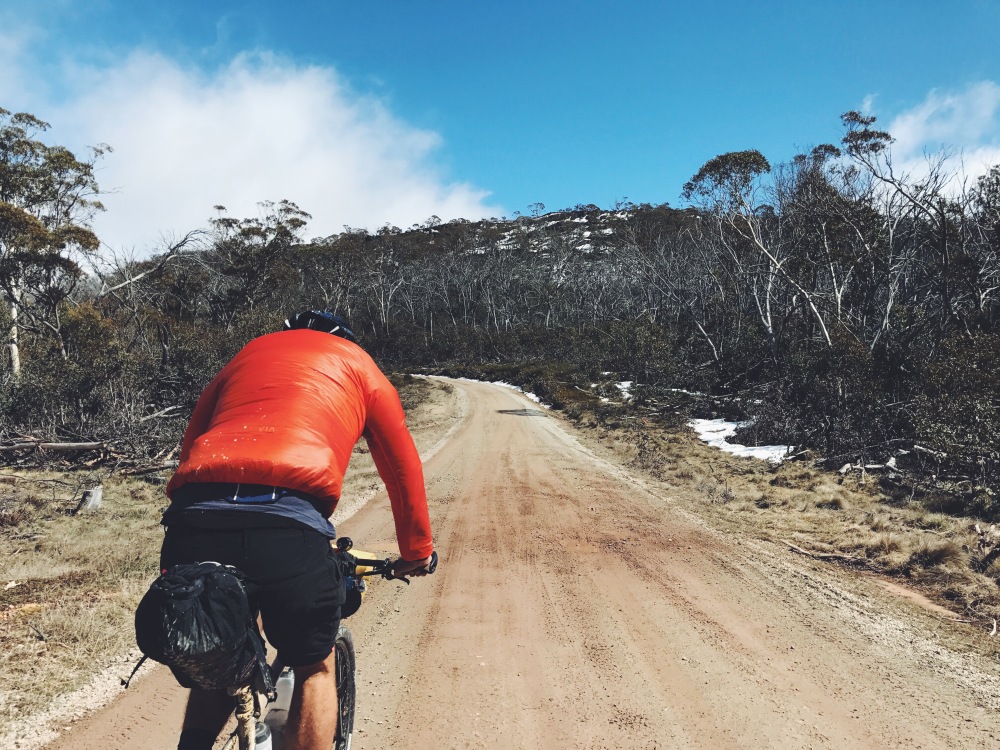 We continued slowly gaining elevation as we proceeded to Arbuckle Junction. The road here splits; Moroka Rd – which I had ridden during the Hunt 1000 last year heads south-east towards Dargo, while we turned north along Howitt Rd and onto the high plains of the same name. Traversing the plateau, the landscape changed, giving way to tussocky grasslands and the ghostly white snow gums typical of the Australian Alps. 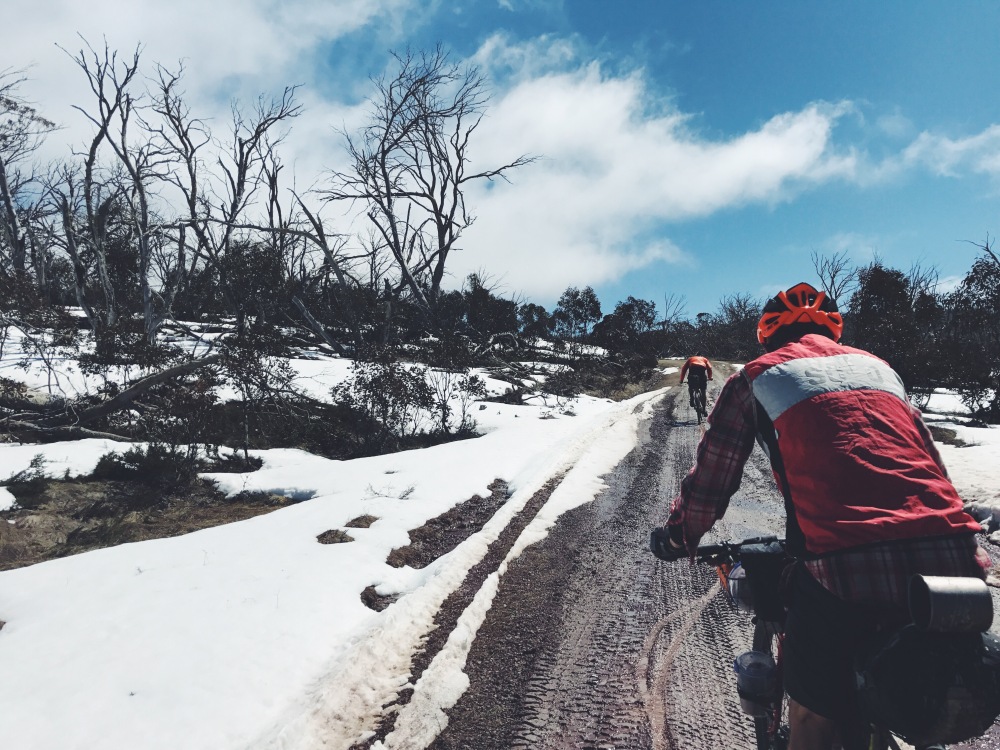 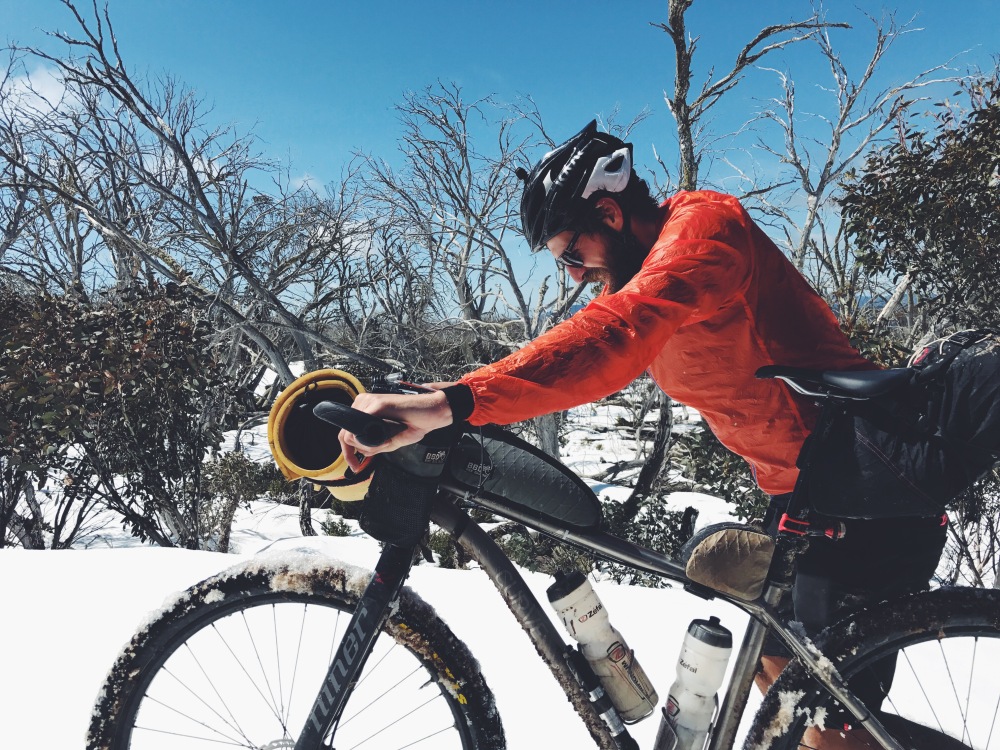 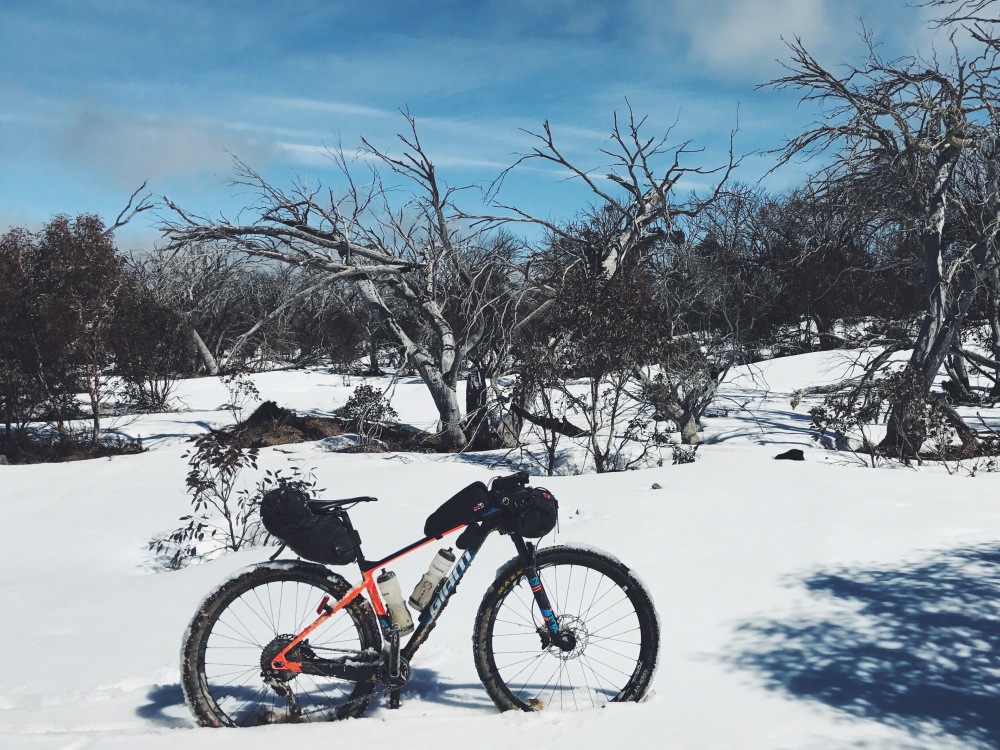 Coming from the south, we began to see patches of snow on the ground, shielded from the sun by the southern aspect of the looming peaks. Continuing along Howitt Rd the presence of snow continued to grow as we approached the back slopes of Mt Lookout. By the time we reached around 15,500m the snow had formed a thick blanket across the road in front of us. By now the sun was high in the sky and shining heavily on the snow. As we got off our bikes and began to push through the snow it quickly became apparent how soft and deep it was; post-holing anywhere between sheen and knee deep. 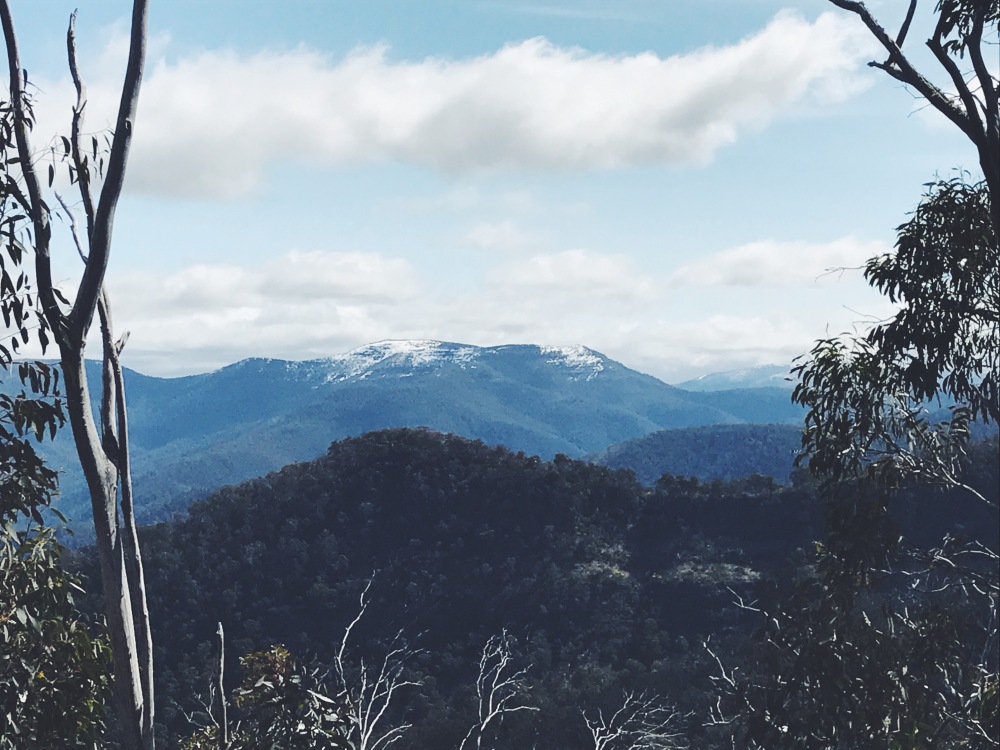 This continued for 6 or so kilometers; several hours of pushing our bikes, the snow collapsing under our weight with each foot step. We began taking turns at the front to break trail, with the others following behind the leader, treading in their now compressed footprints and pushing their bike through the formed tyre tracks to conserve energy. We stopped for a short break and some lunch at the Snowy Ranges Airstrip before continuing our march.

Mercifully, the ridge finally dropped some elevation and on the more exposed northern slopes, the snow began to give way to road. We found ourselves riding in streams of snowmelt, water sprayed up, but our feet were already soaked from the snow. At least the prospect of making up some descent speed and the relative ease of being able to ride was a relief. We still had to occasionally get off and push through some lingering snow fields but we were definitely covering some more ground. Inevitably the ridge began to rise and fall again, first towards an unnamed peak and then later the seemingly aptly named Bastard’s Neck. With the ridge the snowed thinned and thickened and we would alternate between long stretches of our snow-march and then the respite of riding at lower elevations. 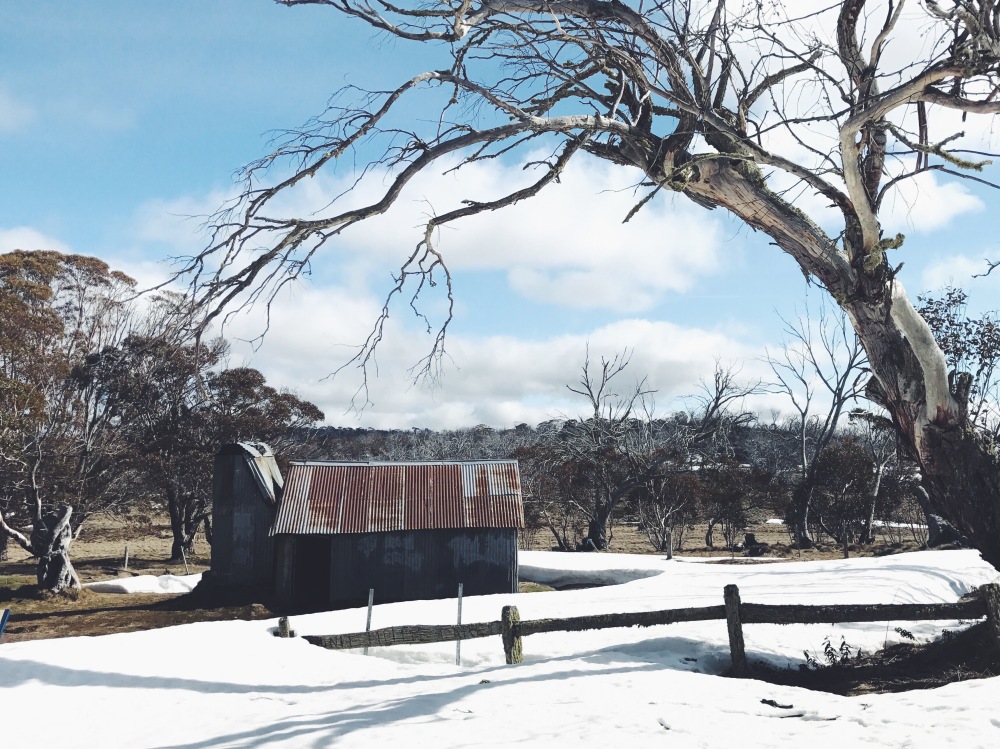 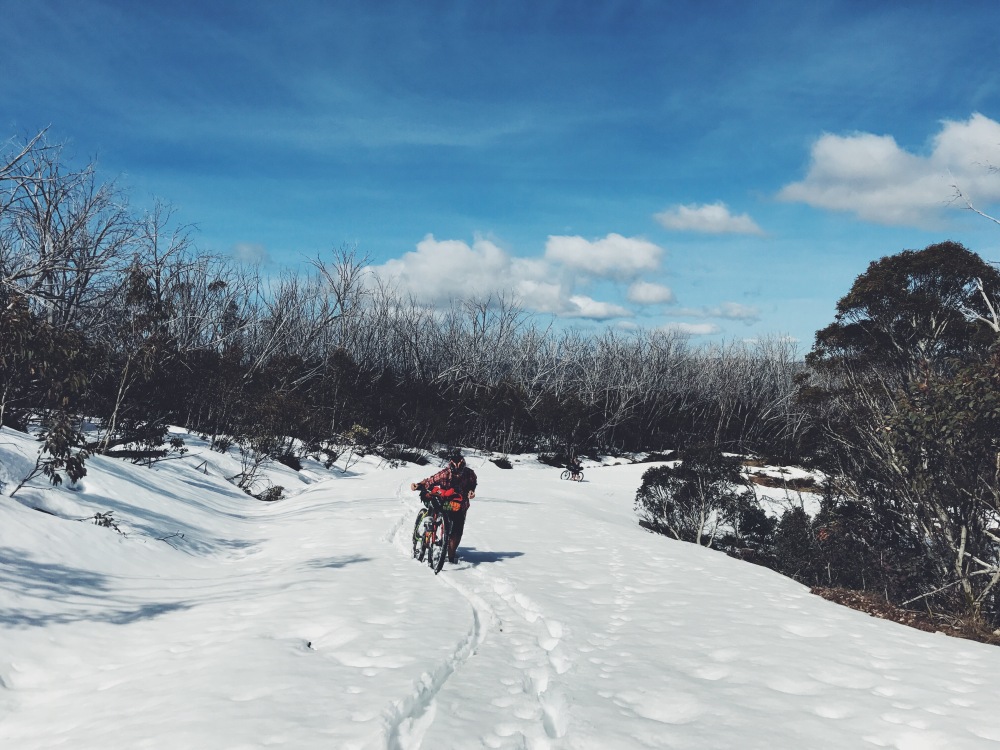 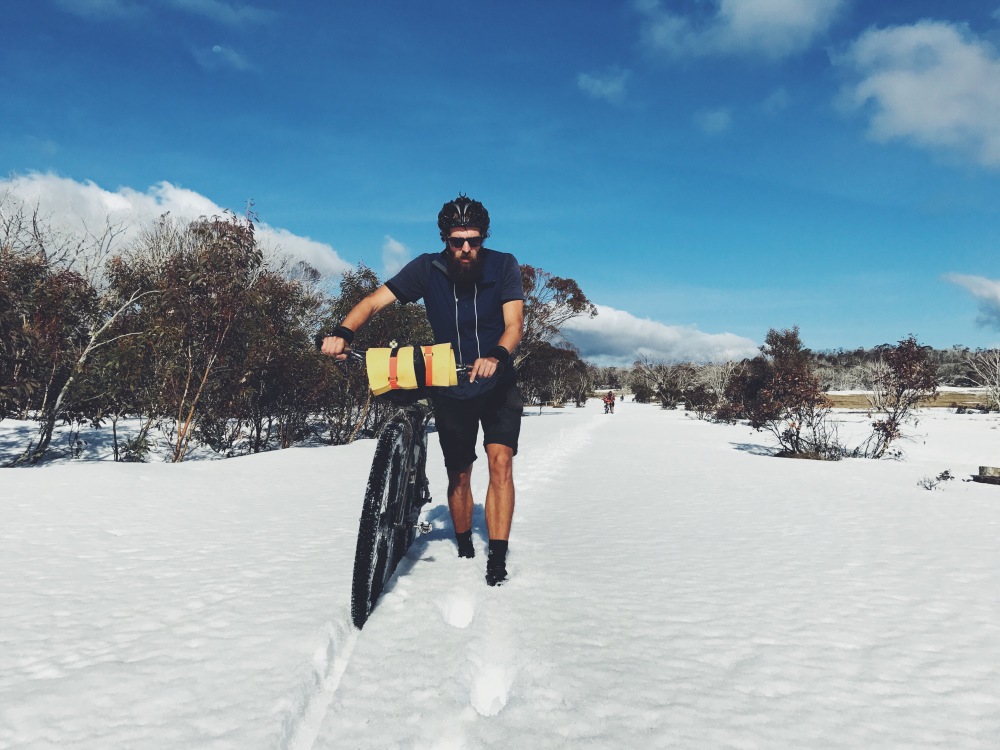 During the afternoon we passed the Howitt Hut. Not the nicest hut, being little more than a few sheets of corrugated iron over a wooden frame and a dirt floor. But with a fireplace, it offers enough shelter to be a welcome refuge to adventurers caught in bad weather.

Proceeding on to King Billy Track we enjoyed a super fun descent down some sharp switchbacks into a gully at 1000m where the track made several river crossings. After wading through these crossings up to our thighs and inspecting the ascent up the far side of the gully we decided to call it a day. We were a long way behind schedule but with only an hour of sunlight left we decided it was the smart decision to spend the night at the lower elevation rather than make the push up the steep, rocky, south facing track back up above 1600m in an indeterminable amount of snow and risk having to spend the night wet, and at a higher elevation. 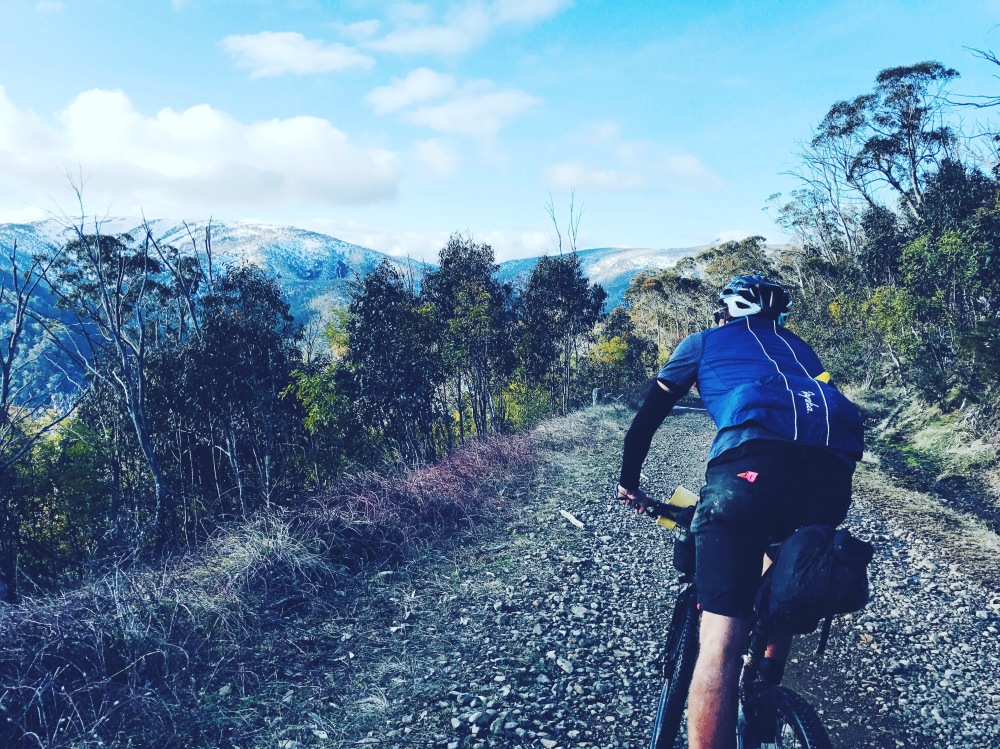 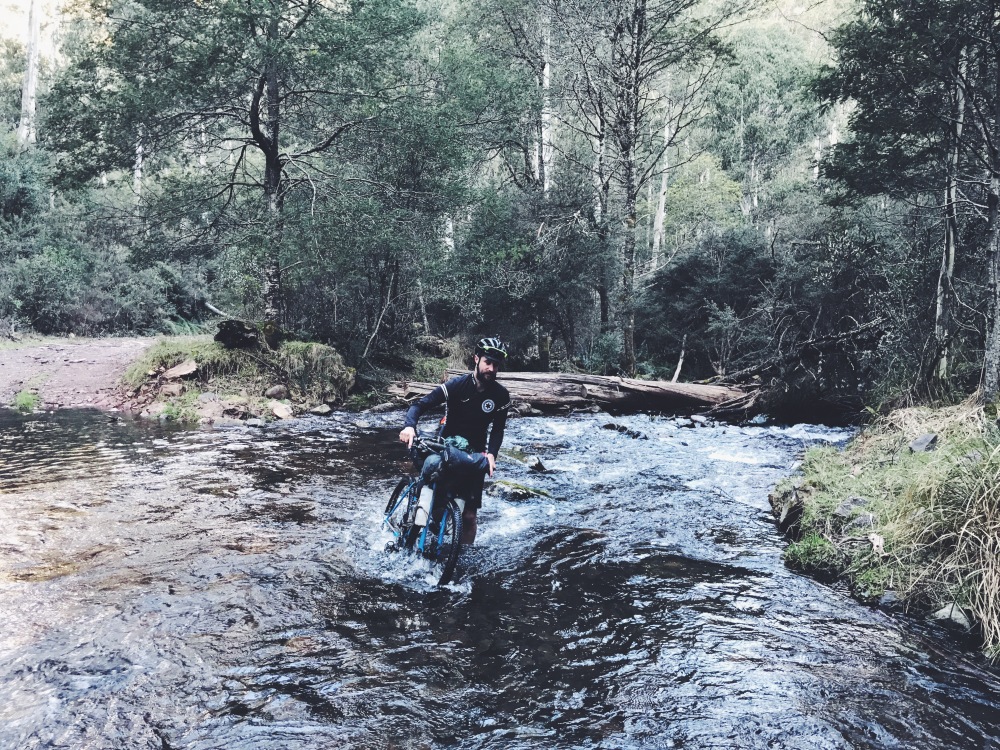 We returned to the banks of our last river crossing where the was a little campsite in a small grass clearing. We collected mostly damp firewood but managed to get a fire going and were able to warm ourselves and dry our wet shoes and clothing before bed.

Our third morning started with the anticipated climb up King Billy Track, back up the ridge towards the twin peaks of the same name. The side of the deep, sharp valley obviously received little sunlight and we hit heavy snow again at around 1300m. Only half way up the climb, we were left to resume the now all familiar snow march of the day before for another 4 or so kilometres. Thankfully the frost from the night before made the snow a little more solid and so, at least early on we were able to stay afloat above the snow’s surface and shuffle along at a descent pace. 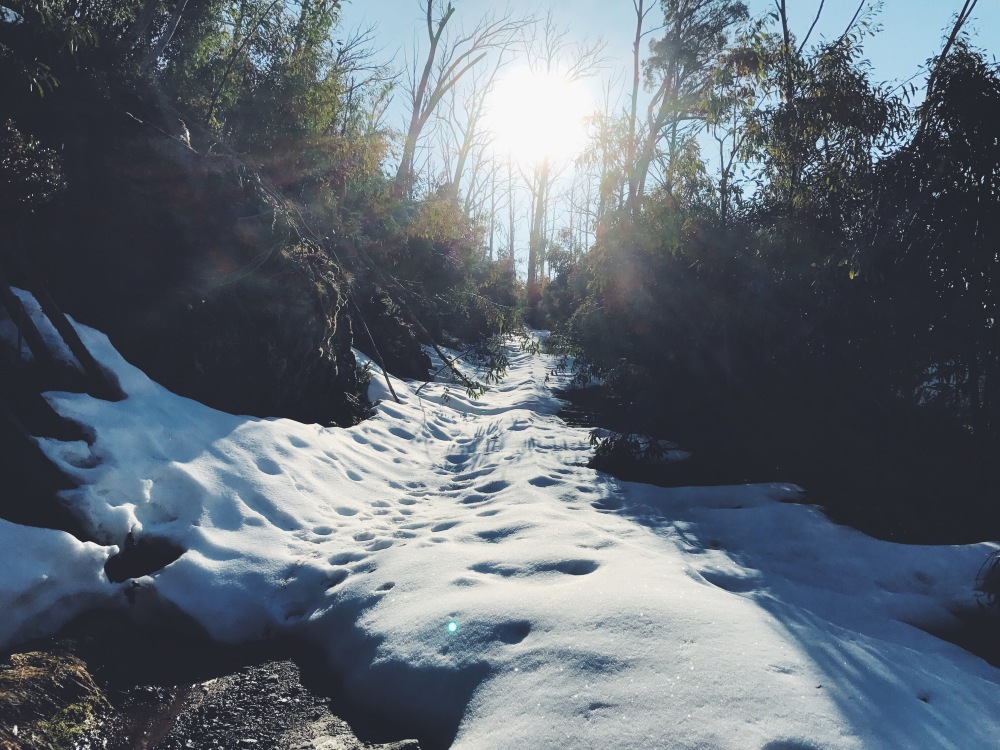 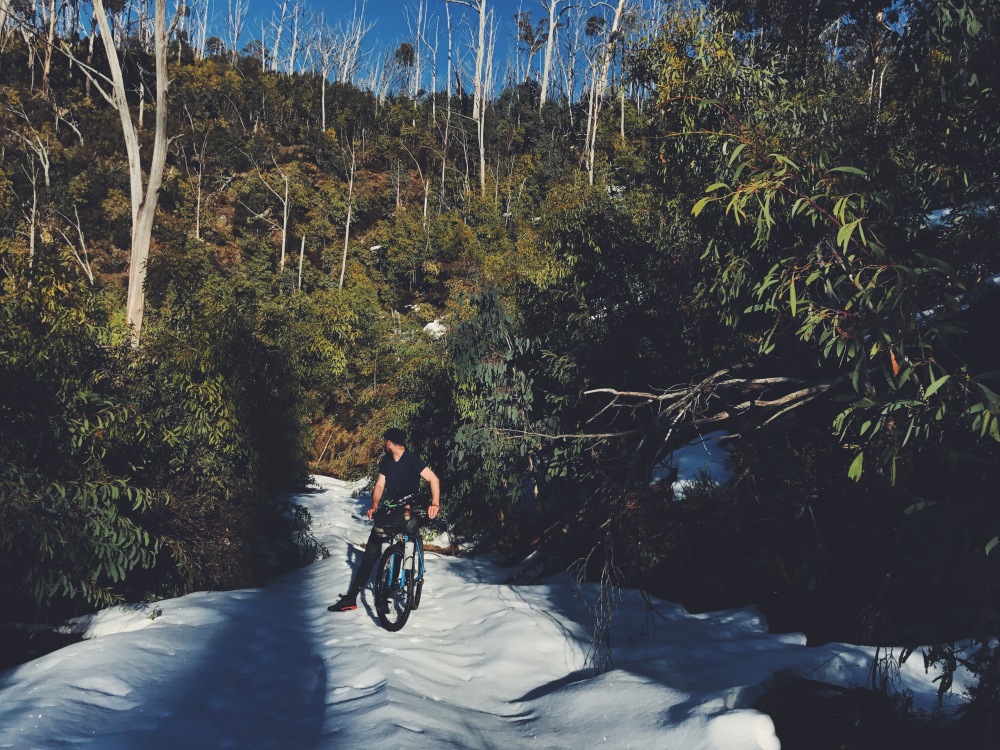 Alas; this wouldn’t last long and we soon found ourselves post-holing up to our knees once again. Gaining the ridge finally was a huge relief and in the shadow of the proud peak of King Billy No. 2 we pointed our wheels down Brocks Road and down below the snowline once and for all. Our original plan had been to continue around the ridge past Mt Lovick and The Bluff, but since it continued along between 15000 and 16000m we the way would too be blanketed in snow. 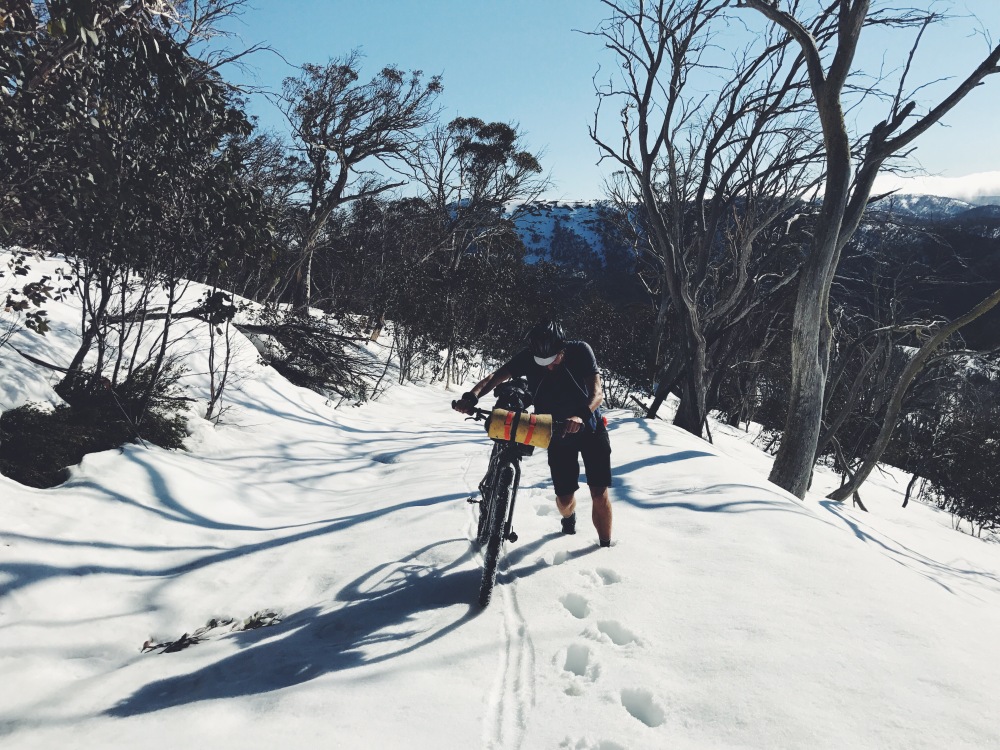 Our route diversion would take us down to the Jamieson River which we would follow before climbing back up a to a lower point in the previous ridge we had gained, to the junction of Bluff Link Rd and rejoining our original route. From the top of the climb we could see across to the snow-capped Mt Buller. 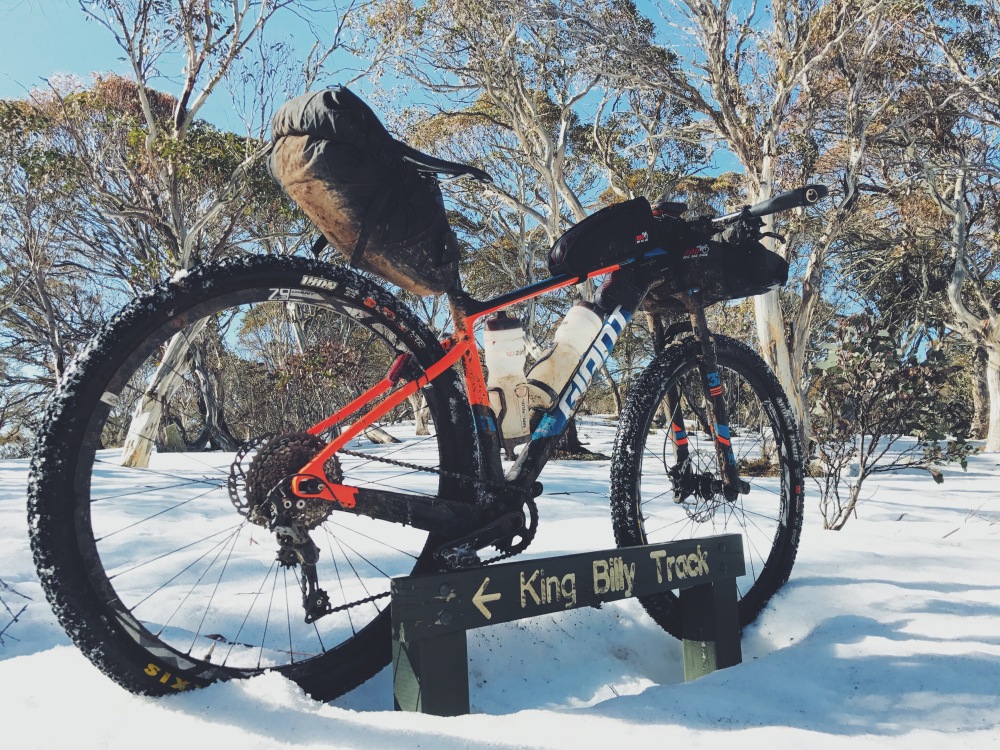 We then continued down to the Howqua River, past the many picturesque campsites along it’s banks including Sheepyard Flat and onto our final major climb up to Timbertop Saddle. At this point the snow had put us a full half day behind schedule, despite carrying extra food I’d eaten my last muesli bar on the climb and we were still 30kms from Mansfield and our first chance for refuel.

The descent was super fast and flowy down Howqua Track and I caught up to a couple of cars that were also descending off the range. We eventually hit the main road that would carry us into Mansfield and began our 25km time-trial to our destination. Despite a couple of dive-bomb attacks from some local magpies and beginning to bonk from the lack of food we limped our way into town and the end of a pretty epic adventure.

The going was tough, but the opportunity to see the high country by bike, still covered in snow was spectacular. We misjudged just how much snow there would be, but were prepared with our gear and food, and were able to assess the situation and adapt our plans to safely navigate our way our without any major hitches and still have a lot of fun along the way despite the challenges.

Check back here for GPX files.