I disembark the train in Bairnsdale, alone on this trip. Not far from where the waters of the Mitchell River culminate in Lake King, after beginning their journey in the heart of the high country.
My own journey is to begin following the direction of the Mitchell, north-west into the mountains. First through the rolling green hills of the picturesque pastureland of East Gippsland, and then as I began to climb, giving way to more typical, hardy Australian bushland.

After climbing most of the way up Mount Alfred through dense bush, without any views to reward my efforts, I notice the route I had drawn up peeled of a couple off kilometres and 200m of elevation short of the summit. This route is one I’d drawn up a while ago and I’d obviously forgotten why I’d planned it the way I did. So, after a quick check of the maps, feeling strong, I took off for the summit hoping for a view back across Gippsland and maybe peek a glimpse of the ocean. Nearing the top I realised I’d been had. There was no view atop this peak. The trees were much too thick to offer even the smallest glimpse.

Carrying on, I began my descent lower and lower into the valley. I arrived in Bullumwaal; a quiet little town of only a few houses that once homed over 4000 people during the gold-rush and a subsequent wood-milling boom.

Having lost most of my morning’s hard work climbing, I found myself back at just 200 odd meters above sea level. I turned north out of Bullumwaal and began my ascent of Mt Baldhead Rd. Climbing out of the valley, as I neared 600m I finally noticed my original route line rejoining my current course. I realised the original intent of my plan; to traverse a ridgeline from the side of Mt Alfred across to my current spot and maintain that hard earned elevation!

35km along Mt Baldhead Rd, having not passed a single car since town, I turned off, bombing down hill along Marthavale Rd to my intended destination for the night. Arriving at the grassy clearing on the banks of the headwaters of the Nicholson River I was greeted by the blackened and charred site of what once was the Marthavale Hut.

Initially I was pretty stressed by my discovery. The forecast was for rain starting overnight and continuing into the next day and I had intended to seek shelter at the hut. I was carrying my bivy as a backup shelter but no tarp. I know my bivy will get me through a night in the rain but it won’t exactly be comfortable. I weighed my options of continuing on my route, but the prospect of climbing out of the gully I’d just descended 350m into and continuing up and along the ridge with not much prospect for other shelter for a long ways yet, I decided I’d do better to stay put at lower elevation where it would at least be warmer.

I ate dinner watching the trickle of a stream gain momentum as it built towards what I knew became a fairly major river diving out of the mountains further along. After food I set up my bivy under the little shelter I could seek from a few trees and settled in for the night.

The deep, steep walls of the gully inevitably served to keep the rain away from my bivy site through the night and it wasn’t until around 5am that the first serious drops of rain awoke me. I took it as a sign to get moving; quickly packing up my gear and getting moving.

My breakfast was a couple of muesli bars and a lot of climbing. Out of my gully and on along the ridge towards the summit of Mt Baldhead. By the time I began my descent down Brookville Road the rain had well and truely set in. I sped down towards the Tambo Valley, half blinded by the water whipping into my eyes.

By the time I reached Swift’s Creek I was well and truly soaked. There was nothing for it but to keep pedalling and keep myself warm. Heading north I passed through the old gold-mining town of Cassilis. I stopped for a brief break and to investigate the old mine site which still homes some remnants of the town’s busier times. 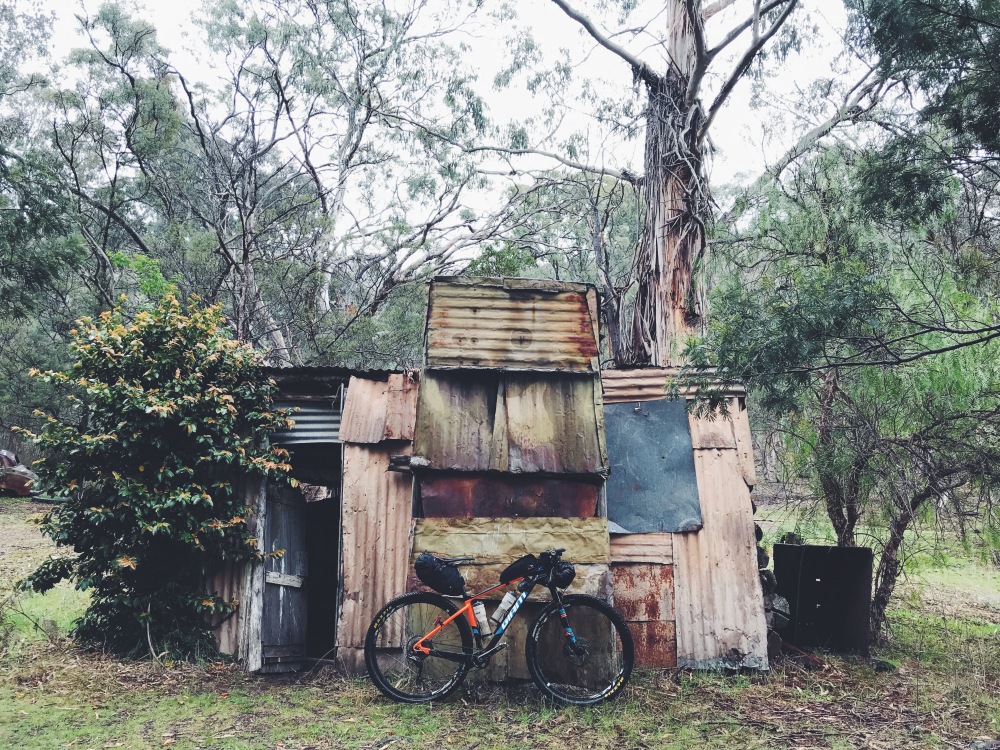 Another soggy 20km and a punchy little climb up the road and I pulled into Omeo, my first and only real resupply for the trip. A brief stop at a local cafe for a coffee and a chance to warm up was very welcome. A couple potato cakes, obviously, and then on to the grocery store for some food for the next few days before rolling on.

I bumped into a group of three other touring cyclists on my way out of town. They looked like absolute drowned rats, as I’m sure I did too. We exchanged details of our routes before parting ways.

After a brief stint on the tarmac, heading back south down the Tambo Valley I peeled East and the climbing commenced once more. As if the mountains were toying with me; the rain picked up just as the road kicked up, and the tarmac gave way to gravel. The dirt road beneath me was now sodden as well as quite steep, making progress slow as I slogged my way up towards Mt Nugong. My wheels felt torturously heavy as they sunk into the mud, and seemingly the higher I climbed, the heavier the rain got.

Once more I knew there was nothing to be done but to continue. Now finding myself again over 1000ms above sea level, and soaked to the bone I was getting dangerously cold; only kept warm by the effort of the climb. I was also spurred on by the prospect of warm, dry shelter and possibly a fire in one of the two huts on the Bentley Plains: Moscow Villa and Bentley Plains Hut AKA the Bush Hilton.

Passing just under the summit of Mt Nugong I knew I was close, but the mountains lashed again and the rain became torrential. All that stood between me and a warm hut now was a steep 300m descent. Bombing down the track my hands started to go numb. 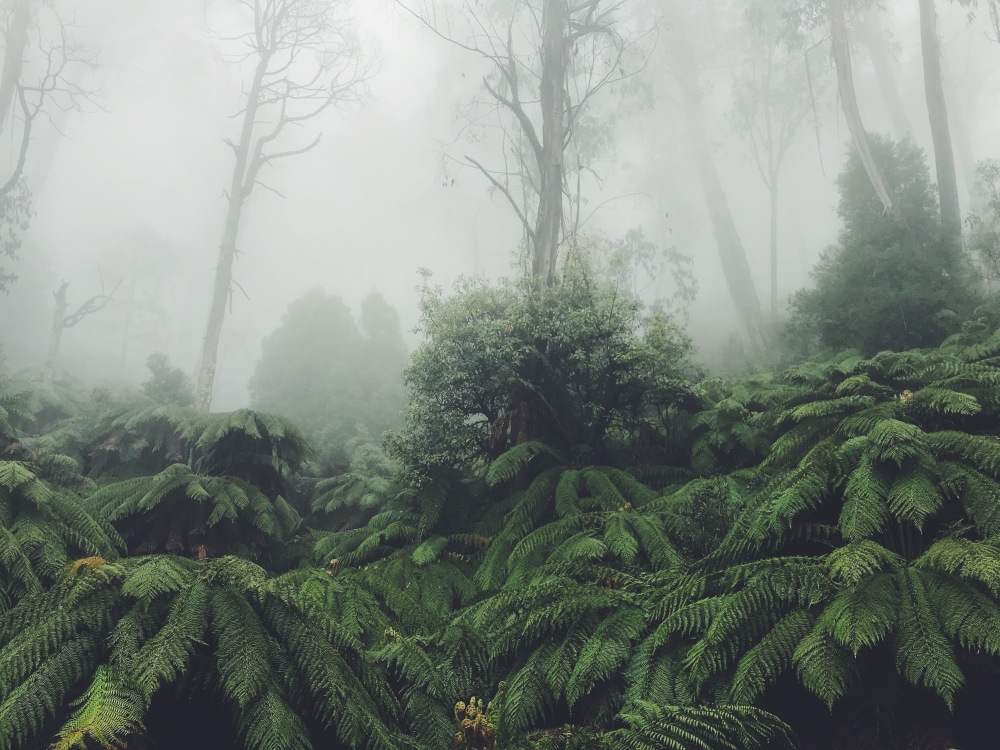 Finally through the mist and sheets of rain Moscow Villa appeared below me. At the sight of three 4WDs my heart sank a little that the hut was already occupied. Too frozen to push on to the Bush Hilton, at least for now, I knocked on the door and entered the hut. I was at first greeted with stares, then questions of bewilderment of where the hell I was coming from and what on earth I was doing out in this weather. Finally, I was offered a seat in front of the roaring fireplace and a plate of roast veggies leftover from their dinner, both of which I greatfully received.

Now dry and warm, and after spending the rest of the evening exchanging stories and track knowledge with my hosts I retired to sleep in the picnic shelter outside as the hut was a little cramped for us all to sleep. A frigid wind howled and the rain still drove but I curled up deep inside my bivy and slept sound through the night.

I woke to rain. Having done the math the night before I knew I had 170km to travel along my planned route to Bairnsdale and had to be back by 4pm to make the last train. My alarm was set for 6am but hearing the rain still falling I told myself I’d just drop back into the valley and take the main road into town. I went back to sleep for another hour before waking in a start and realising that was extremely boring and I’d much rather stick to my original plan of the high plains traverse.
Now, stupidly on the back foot and racing the clock I threw my gear into my bags, a muesli bar down the hatch and jumped on the bike and back into the rain once more.

I climbed up out of the grassy Bentley Plains, along the Bentley Plains Rd to the Nunniong Plains. Continuing along the plateau the weather still did not relent. I arrived at the Nunnett Plains where, with more time I would have liked to stop and explore more, but I was already going to be cutting it fine.
On I pushed down Timbarra Rd, past the Green Hill huts that appear to be having some work done to them, and finally, dropping elevation. I was soaked through again and was getting pretty cold now that I was descending. I kept stopping to add more layers but thankfully once I dropped below 600m the weather started to clear as I’d hoped that it would and I finally received some respite from the rain after 30 hours of downpour.

Coming down towards Buchan I passed through a large stretch of forest that had been severely burned – I’m guessing last summer by the lack of any regrowth.

Once on the Buchan-Bruthen Rd, I had originally planned to divert around some back roads and forest tracks into Buchan, but it added an extra 20kms and would be a lot slower. So a 50km TT along the road was in order. I’d completed the high plain traverse, which I was the main point of this leg of the route so I was happy to concede this part if it meant making the train. 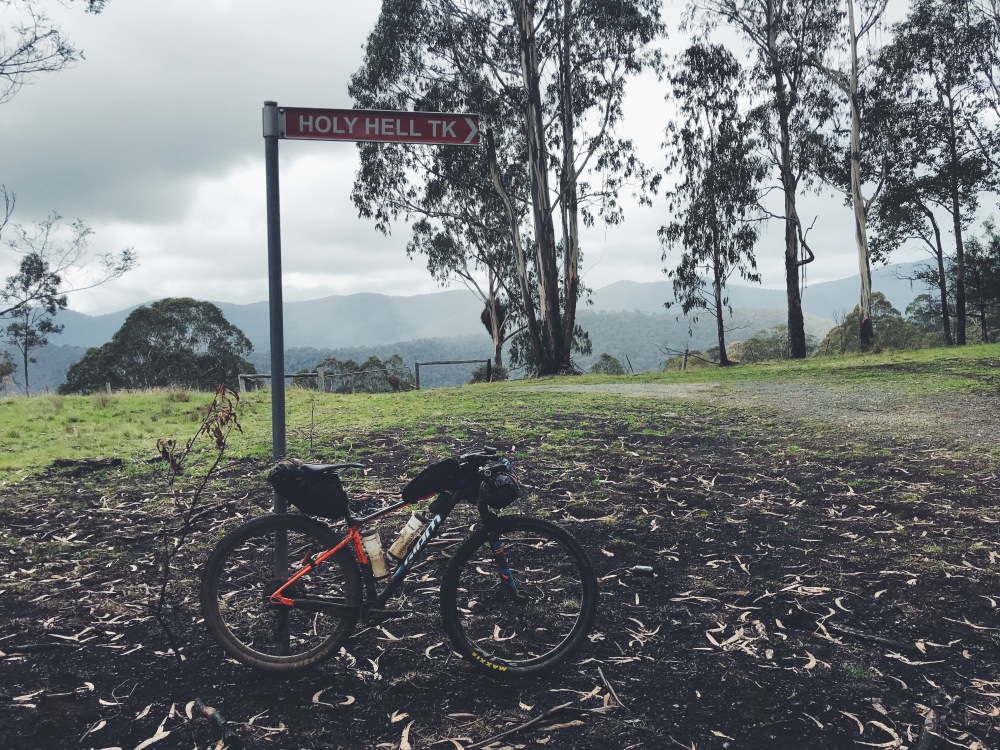 After making good time into Buchan and a brief stop for food I hit the East Gippsland Rail Trail for the final sector of the trip. I again made good time along the rail trail which offered a good gravel surface and typical mild grades.

I made it into Bairnsdale with a half hour to spare. Despite the adverse weather it was an incredible opportunity to explore some new country and appreciate some solo time in some very remote and rugged land.